Readers, be prepared to delve into the world of the Melancholic Soul King, Mac Lloyd.

Featured on Audiotarky, he is a truly unique songwriter and producer that amalgamates influences of jazz, soul, hip hop and electronics into beautiful projects like the Melancholic Soul Club. He’s collaborated with the likes of Jman (Babylon Dead, Kaotik Kartel), Res One (Split Prophets, Dutch Mob), Lazy Eyes (Pupils Of The Clock) and more, and he joins us here to give us an insight into what makes him the musician and producer he is today.

Thanks for joining us, Mac Lloyd! Let’s start at the beginning - how did you first get into music?

Well, music was always prevalent in my life at home, in car journeys, games like Tony Hawks and on skate videos etc. I always viewed it as some ‘Other worldly, they must be a God’ type thing as no one in my family played an instrument in my younger years. Then I watched School of Rock and was like “Holy shit these kids are my age! I can do that!”. I must have watched that movie every day for months on end - haha! It was only a short matter of time before I picked up an instrument, which I did at age 10. My dad took me to collect a second hand Squier bullet strat in the classic tobacco burst finish. Once it was in my possession it rarely left my side.

Your name is Rob, so where does the Mac Lloyd name come from?

My surname is McLeod, and a lot of people try to pronounce it like Macloyd, so I just embraced it really and it felt like a natural name that was close enough to home to use.

You have a deep, soulful sound. Have there been any heavy influences or inspirations that have helped shape the sound of Mac Lloyd?

Having grown up on a lot of blues, classic rock and soul music I think the emotive elements of those genres really worked their way into my playing and songwriting. Over the years I developed my own tastes in hip hop, heavy metal, and delved deeper into jazz with (mainly) my grandad’s assistance. There are so many areas that I’ve drawn influence from that span from Etta James to Flatbush Zombies, Danny Brown to Bob James, Led Zeppelin to Sam Cooke & Otis Redding.

It’s a tricky question, but if you had to choose - who is your favorite musician or group and why?

This is one I really struggle with. I know it’s cliche but it depends on my mood entirely! If we go by genre it would also change weekly but here’s a few all time favorites based on genre:

I imagine music is all-encompassing in your life, but how do you nurture your own creativity? Do you have any hobbies?

By writing a lot of different types of music, I’m able to keep the creative juices flowing and not keep myself tied down to any one particular style. If you’ve listened to my music you’ll probably notice how each song is quite different from the last, even if they technically fall under the same umbrella/genre.

Lately as music becomes more like a profession I’ve found myself doodling, drawing, sketching and doing graphic design more and more, which I’m absolutely loving. I’ve always enjoyed a challenge and whilst I drew constantly as a kid, I feel like I’m having to learn all over again based on my current taste.

Now, we love to know about the behind the scenes magic at Audiotarky. How do you build/write your songs? What’s your process & approach?

So I’ve had to try over the last year or so to go into studio sessions with no expectation, that way whatever comes out of it I can enjoy. Ideas that become fully fledged songs usually begin with a beat of some kind, although if I’m using it for a Mac Lloyd release there is usually some guitar in there. I usually just churn out a bunch of beats and then portion them off into how I’ll use them, for solo, collabs, beats to go on sale etc. Lyrics however, come at incredibly random times, I have notepads (both digitally and physically) crammed with one liners or full songs worth of lyrics. Sometimes I reach for one of those or start fresh depending on how the instrumental is hitting at the time. It’s all pretty sporadic because I am absolutely crap at designating time to particular things and being organized in an artistic way!

Now, what would be the perfect gig for you? Who would you want on the bill?

I’m just gonna reel off some artists so it might look like more of a festival lineup… Tyler the Creator (with a full live band), Brockhampton (although on indefinite hiatus), Flatbush Zombies, Danny Brown, Metric, Daniel Caesar, Badbadnotgood, H.E.R. I could go on but I think that would leave me pretty satisfied. Fortunately bar a few i’ve seen most of these artists live and can vouch for incredible live performances.

What would you say is your proudest accomplishment as a musician?

I struggle with this question because accomplishments are valued in so many different ways and for different reasons. Getting on Chuck D’s radio show (Shout out to DJ Shorty and Vice beats for the hook up) was really one that hit me hard though. Hearing Chuck D’s voice say my name got me really choked up and simultaneously very hyped. I grew up listening to Public Enemy. They have one of the most profound legacies in hip hop, and he has one of the most impactful voices of any rapper. Before the pandemic I’d seen them live for the Gods Of Rap tour. I remember when I listened back to it we were grabbing some Papa John’s pizza in Swindon (I think it was Swindon) and when I got back to the car I was crying (happy tears of course). I think what took me by surprise is the fact that DJ Shorty chose to play Man Of Faith which as you’ll read below is a deeply personal song for me and wasn’t even a single from the Melancholic Soul Club project. To know it’s worthy of that sort of stage or platform really just hit me, and reaffirmed that being true to myself and being authentic through my art is truly important.

You’ve collaborated with artists such as Jman, Lazy Eyez, Res One and Cassie Madly. In a dream scenario, if you could work with any artist who would it be?

You guys aren’t making these easy to answer! Haha! I think I could have made something incredible with the late Mac Miller. His last two albums were a source of inspiration when approaching topics of mental health and adapting to tough situations, ‘Swimming’ in particular really helped me get through some really rough times. I remember I was at work when I found out he’d passed away. I was honestly devastated. His music truly made you feel like you knew him, and his ability to be so vulnerable was incredibly moving to me. Just a few months prior to that I was also at work on a Sunday shift when I was watching his NPR tiny desk concert. The first time I heard 2009 and it cut right through me. I was trying my absolute hardest not to cry as I watched that performance maybe 2 or 3 times over. I think we could have made something really great one day. Rest in Peace, Malcolm.

We love the EP Melancholic Soul Club which is featured here on Audiotarky. What’s your favourite track on the album and why?

I think, whilst that project is deeply personal to me for a lot of reasons, my favorite track is ‘Man Of Faith’. It still chokes me up a bit when I hear it now, it’s about my Grandad’s inability to accept the loss of his son, who died just a few years before the song was written. My uncle was an incredibly kind person with an immense sense of humor and knowledge on music, TV and film. Losing him really rocked our family. My grandad had passed by the time I wrote the song, and it just explains how much it consumed him and how we had to witness that deterioration of a man who was always so strong and brave, whilst doing what we could to support each other. My grandad fortunately met my son Theo before his passing, something my uncle couldn’t do, but they both live on through all of us and there will be many traits of theirs imprinted in my son’s personality, I’m sure.

That’s a beautiful sentiment, Mac. What’s next for you? Do you have any future projects in the works that we can look forward to?

This year I’ve got a few things lined up! I’ll be dropping a stripped back album which will have alternate, laid back versions of tracks from the Sweetheart Soul Jams & Melancholic Soul Club EP. I also have a bunch of collaborations with some incredibly talented cats that will be coming out throughout the year, as well as an EP with London/Brighton based rapper Harv Le Toad who recently dropped an incredible album on YogoCop records with producer Bo Bribery. Check that out if you have some time!

Where can we people hear or see you performing next (live and/or radio etc?)

So I recently did interviews for both BCFM (Bristol) and Bath Radio, which you can listen back to on their sites or Mixcloud. The BCFM show has a few of the stripped back album versions so if you wanna check those out, please, be my guest!

Thanks so much for talking to us, Mac Lloyd!

Catch Mac Lloyd at the Goodentime Festival, on the 3rd September 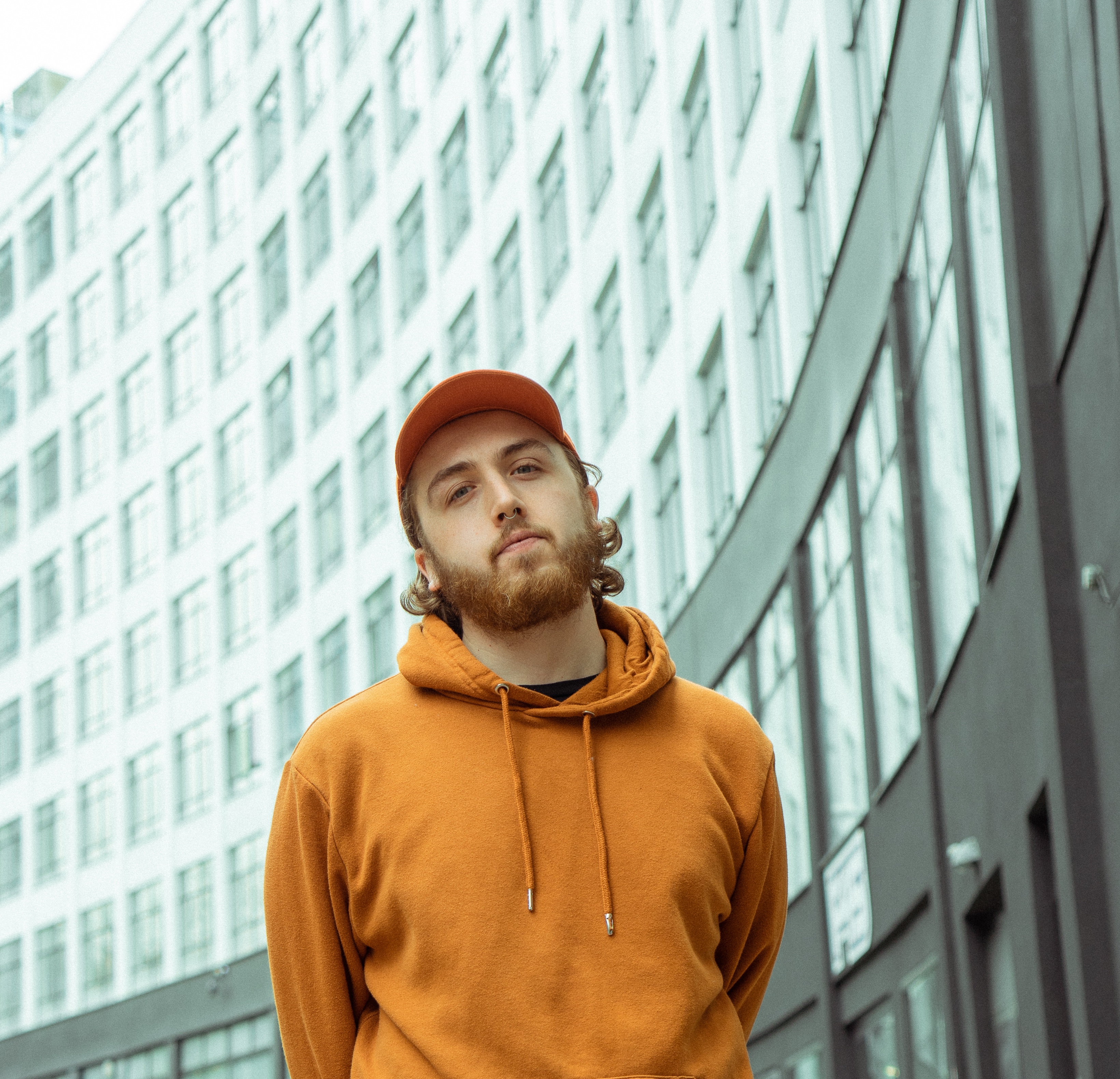 You can catch up with all things Mac Lloyd in the following places: